Service Pack 3.001 adds a host of new features to combit Report Server 3. Some improvements in our enterprise reporting solution were inspired by the productive feedback from our customers. Thanks for letting us know about your ideas! Here’s a short list of the latest features and improvements.

The secure, scalable database platform Microsoft SQL Server 2016 has everything built in, from advanced analytics to unparalleled in-memory and can now be used as data source or in the backend.

With combit Report Server Microsoft SharePoint 2016 can be used as data source or as document storage for generated reports. The Enterprise Edition allows you to create a schedule for automated reporting. The output is then automatically and reliably distributed via Microsoft SharePoint. For example, a report with the week’s sales figures can be generated every Friday to make the data available for the whole team.

Based on the same technology like used in combits reporting tool List & Label, we’ve implemented this new data source to give you yet another choice of data source.
Native Aggregations

These new aggregate functions work directly on the SQL data sources and provide you with a lightning fast way for data aggregation. 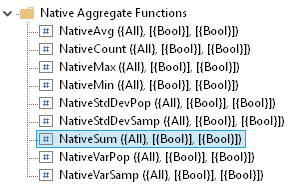 You can find more detailed information in the PDF file when downloading the latest service pack.