About five years after the release of the first version, we were looking for an alternative. It was clear to us that the .NET Framework could not continue in the long term. Especially since .NET Core had already appeared as the new rising star in the Microsoft sky. So everybody agreed that the new version should be developed with .NET Core.

But which interface technology should be used?

First, we analyzed the current state of web development. Keywords such as SPA, serverless computing, PWA, GraphQL, Webassembly, React, etc. were taken into account and included in the evaluation. We wanted to rely on an established technology so that the implementation would be as smooth as possible. In the end, we chose React because it was already known from another project and offers a very flexible library as opposed to a large framework like Angular.

Since the Report Server has a fairly straightforward interface, the rewrite of the interface was acceptable. The already existing web services were polished up a bit as a connection to the backend and could thus be reused.

We also had to find a replacement for the jQuery Mobile we had been using until then. For this purpose, several CSS frameworks were analyzed – with the result that we finally decided on Bootstrap.

The effort to port the core of the Report Server from the .NET Framework to the . NET Core Framework became more complex than expected.

For example, we had to find replacements for some of the components we were using. We also found that some database drivers were not yet available for use in .NET Core. The discontinuation of WCF and the switch to gRPC also caused some sleepless nights for the developers responsible.

Overall, the complexity of the move to .NET Core was a bit underestimated. There were a lot of little things that we couldn’t plan in advance, but then took a lot of time. The learning curve of implementing the interface using React and Typescript was exactly as expected. Considering the amount of new technologies and libraries we had to use for version 26, we can be quite happy with the result.

The goal was to be as close as possible to the old version to make it easier for users to switch. We have definitely succeeded in this. 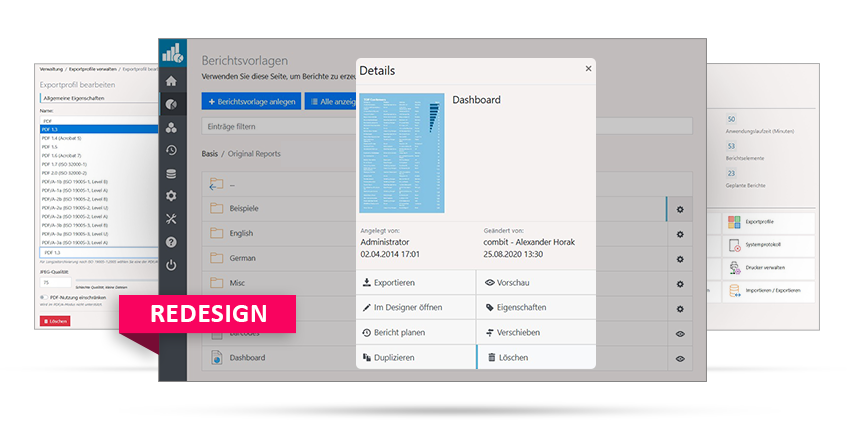 The new Report Server brings many improvements, including:

With the switch to .NET Core 3.1, we have set the course for the future. Now we can better realize the wishes of our customers and keep the Report Server up to date with the latest technology.